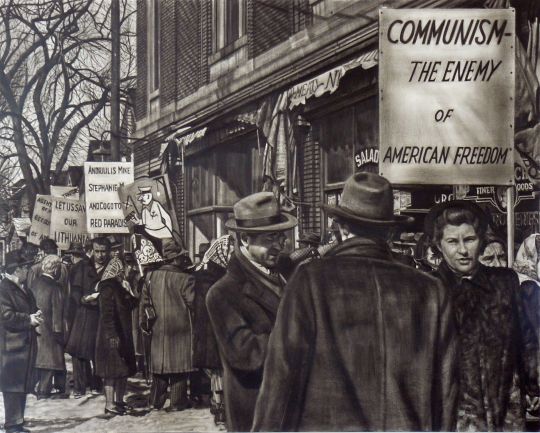 McCarthyism is a series of paintings based on archive material from the Chicago Sun Times newspaper relating to the hearings of the ‘House Un-American Activities Committee’.  Formed in 1938, the committee became permanent in 1945 and was eventually abolished in 1975. The titles of the paintings are taken from inscriptions on the backs of the photographs. 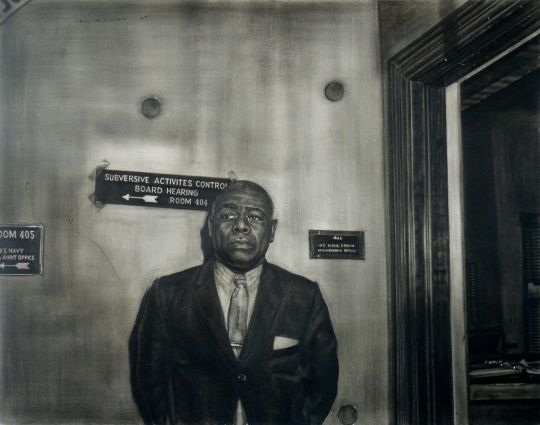 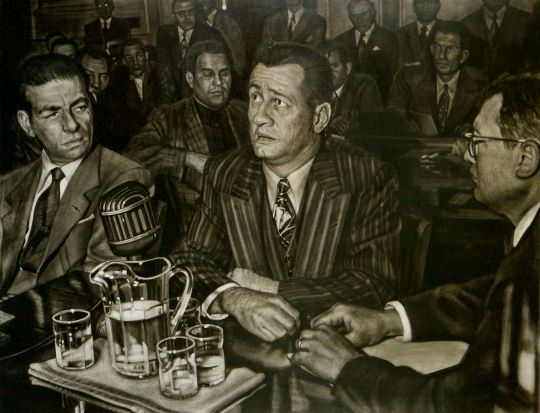 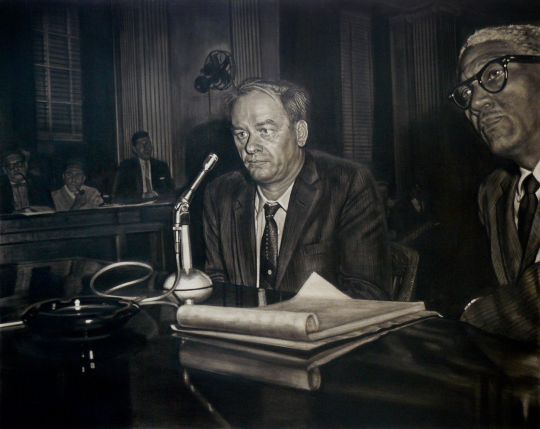 An interview with JT Chavez for the catalogue of the McCarthyism exhibition at the University of Chester, 5 February – 26 February 2016.

Q. What is your perception of this period of American history?

A. Like a lot of people I grew up immersed in American culture. Not just the TV shows and films but the work of novelists such as Faulkner, Steinbeck, Bellow, Malamud and Salinger. So I was aware that the dominant narrative of American lifestyle wasn’t the whole story. I found out about the Hollywood blacklist and the fate of actors such as Zero Mostel at some time in the 70s when there were signs of their rehabilitation but I was still thinking of the ‘red scare’ as some kind of purge of the entertainment industry. Obviously it was far more ruthless and pervasive than just forcing some celebrities out of work. As a fan of Woody Allen, I saw The Front in 1976 and realised how grim it must have been for those suspected of ‘subversive tendencies’.

Reading around the subject today, it’s difficult to draw clear conclusions about the period. Unions in America had always had a tough time, but by the 1940s the perceived threat of Communist infiltration had intensified and state employees were having to sign loyalty oaths to stay in work. Bodies such as the ‘House Un-American Activities Committee’ were touring the country publicly interrogating anyone with the slightest evidence of left-leaning beliefs. Most commentators claim that there was infiltration of the federal Government and that the risk was real, but also lament the narrowing of political life and the climate of dread and suspicion that persisted well into the 1960s and seemed to be revived by Reagan in the 80s.

As a word, McCarthyism was coined in the 50s but has since been used to describe any kind of political persecution. However, I do think we need to be mindful of the techniques that are used by authorities to discredit and denigrate anyone with a social justice agenda, and more recently in this country, minorities that it’s politically expedient to portray as a threat. The press photographs I based the paintings on are an illustration of the fairly primitive but effective methods the media can use to imply the guilt of people that challenge vested interests.

Q. What draws you to visually portraying monumental periods in history?

A. I’m fascinated by all the forms of history painting and the attempt to depict significant events in a still image. After working in other idioms for a long time, I became disenchanted with painting about painting and wanted to connect with themes and issues that had a more public resonance. Having taken part in the big public demonstration against the second Gulf War, I became determined to politicise my work and did a lot of reading about political philosophy and those kinds of painting that had an ideological agenda. After a while I realised that it’s difficult and maybe futile to attempt to persuade anyone through art and that you really can’t dictate how people will interpret your paintings. I started working with old snapshots and photograph albums that evoked how ‘ordinary’ people endured particular regimes and turbulent periods in history. There seems to be a shift in our culture towards ‘small’ or personal histories as a way of approaching subjects that just seem too big to grasp, such as the Second World War or the Cold War. In painting, the stress on innovation in writing about painting seems to bypass what many people find interesting and exciting about it, which is narrative and incident.

Q. Apart from the obligatory McCarthyism movie that comes out every decade, this period of political injustice that took place by one of the (so called) dominant democratic nations towards its own people seems to be quietly disappearing from the public consciousness. Is it a case, as George Orwell once wrote that “who controls the past controls the future: who controls the present controls the past”?

A. It’s a cliché but it’s true that you need to know your history to know where you’re going and anyway this stuff is fascinating! The photographs I based the paintings on are like stills from Film Noir movies and when you watch the newsreels such as Operation Abolition, the theatricality of the HUAC hearings is genuinely shocking. I suppose most of us are preoccupied with making ends meet, but when you hear the political right talking about the ‘enemy within’ it feels as though we’re entering a timewarp. Obviously, I haven’t experienced anything like McCarthyism myself, but any exposure to news media these days reminds you that the whipping up of public hostility is still going on, and by the same means. I wanted to show how it’s done and to perhaps introduce a bit of critical distancing on it as an aspect of public life today.

Q. Obviously it was far more ruthless and pervasive than just forcing some celebrities out of work.” Is this hunt for ‘reds’ beyond the entertainment industry, such as the US government departments visually represented in your work?

Yes. Most of the paintings are based on photographs of trades unionists and teachers at HUAC or Subversive Activities Control Board hearings. There are other paintings of trial juries or defendants leaving court and a few of both communist and anti-communist demonstrations. There’s only one painting relating to the purge of the film industry. Edward Dmytryk went on trial in 1947 as one of the ‘Hollywood Ten’, a group of screenwriters and directors accused of communist affiliations. He escaped a prison sentence by implicating a number of colleagues, but the others were jailed and lost their livelihoods.

I’ve managed to track down the transcripts of the hearings featured in the exhibition and they make for hilarious but chilling reading. One of the accused, Hugo Beiswenger, was attacked for teaching a class on dialectical materialism!

Q. In painting, the stress on innovation in writing about painting seems to bypass what many people find interesting and exciting about it, which is narrative and incident.”

This is a really interesting view of the gulf between written art criticism and the actual viewer experience, could you expand, particularly in the way your own work has been viewed by audiences but also written about.
The idea that art is in a permanent state of evolution is what drives most art history and criticism. For example, art theorists have argued that cubism is somehow more sophisticated or better than Renaissance perspective. I’m more interested in how well different ways of painting communicate to the broadest possible audiences. Innovation is an aspect of art as a social activity that lends itself to written narratives but the idea of ‘progress’ rather than just change in art is rooted in the Hegelian concept of evolution towards a condition of pure philosophy. It leaves out all sorts of things that painting can do that other artistic media do less well.

It’s not just that paintings can depict events or tell stories. We know that Clement Greenberg for example, and much modernist criticism was sceptical of storytelling, symbolism or allegory. But for me, it’s that a painting can convey more than one idea at a time. The visual aspect of a painting makes it polysemous, or open to multiple interpretations. You simply can’t say two or more things at the same time with the written word, where meaning is organised and experienced sequentially, whereas you can with a painting. Painting can also convey mood, or atmospherics far more effectively than the written word, where you tend to get tangled up in a process of translation from words into feeling if you’re reading a novel or a poem. The evocation of space behind the canvas surface is another slightly mysterious aptitude of painting that I’ve never really experienced through written description. Space is obviously integral to theatre, film and opera but again, time-based forms that are anchored in scripts of one sort or another somehow fail to exploit the visual power of their settings.

So painting needn’t subsist on it’s own formal or material qualities, or on a prescribed kind of conceptual agenda. It can potentially engage with lived experience and recover a communicative force and an audience that it seems to have lost. That’s not to say that innovation in materials and processes and a broadening of content isn’t worthwhile. With this work I’ve tried to develop a technique that fits with the source material, but at the same time I’ve tried to convey the grimness of the experience for the accused. People who look at the work connect with it perhaps intuitively by empathising with the subjects, but at the same time they recognise the historical setting and the mediation by photography. They draw parallels with present day political situations hopefully without feeling they’re being told what to think. I’ve tried to reduce my own presence in the work by confining the initial decision making to the choice of photographs to use. They have to condense the ‘before’ and ‘after’ of significant events somehow, which of course is what the original photographers were trying to do as well.

Q. To your mind why was the paranoia of communism so intense in America during this period? Here in the UK some of the US blacklisted writers and producers actually found work such as Hannah Weinstein who pulled together a further 5 blacklisted writers to join her aptly on LWT’s Robin Hood (obviously everyone worked under pseudonyms so the series could be sold to American networks).

A. The paintings will be interpreted differently depending on the viewer’s own perspective so in a way anything I might conjecture is beside the point. I have my own views, and I certainly think world events had a major bearing on things as well as the domestic situation in the States. In the 30s during the Popular Front years of international opposition to Fascism, communists were very active in setting up unions and front organisations and in defending workers rights in America, something that’s never been welcomed by captains of industry. In the UK we had an active Communist party but they were fairly visible and ultimately lost out to the Labour party as the left wing alternative. After the war a kind of morbid fear took hold of the wealth holding classes in the USA and their allies in Government. The frenzy of denouncements reached a peak with McCarthy but by the late 1950s a lot of the heat went out of the anti-communist argument when it was seen that it was having a dire effect on constitutional freedoms. Khrushchev distanced himself from Stalin in 1956 and Russia seemed less of a threat, whilst in the States McCarthy had made the mistake of ‘redbaiting’ the Army, the FBI were persecuting homosexuals and the black civil rights movement was being linked to communist infiltration.

It all went too far, and comparisons to Russia or Eastern Europe would have seemed odious to advocates of the ‘American Dream’. The unions never really recovered though, and the myth of the American citizen as self-detemined entrepreneur was never going to yield to state ownership and 5 year plans. I suppose the whole thing was a vivid example of how a kind of panic can be spread throughout society by the powers that be, when they perceive their interests to be under threat.